This week is a shortened trading with markets closed Monday, June 20 for the Juneteenth holiday.

There’s no other way to put it: the price action in the US stock market this week was ugly, with the S&P 500 losing over 5% on the week, officially putting the index in the “bear market” territory, meaning the index dropped 20% from recent highs.

The reflation commodity trade which has shown some negative correlation to stock returns recently didn’t fare any better either, with nearly every major commodity contract declining on the week. Here’s the performance breakdown of all major futures contracts over the past week:

You had virtually nowhere to hide last week, as all sectors and nearly every large cap stock was highly correlated with the broad market. Look at the bloodbath among S&P 500 constituents, nearly all red except for those few exceptions where a significant catalyst was in play: 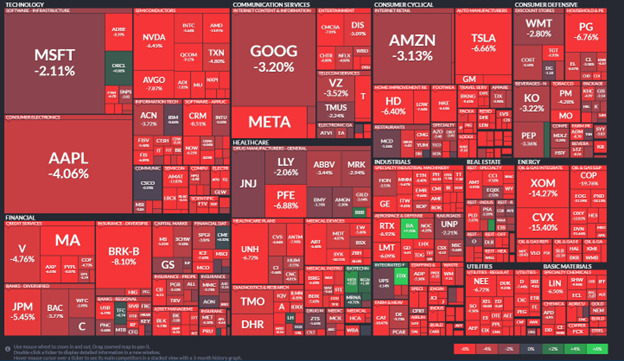 And the price action in the S&P really leaves little room for optimism, at least from the trend/momentum perspective. The index made significant new lows on wicked momentum and closed the week within spitting distance of the lows.

Currently the dominant pattern in the S&P is clearly a downtrend pattern, one which has gained significant momentum throughout the week.

Hard to make a bullish argument as of now: 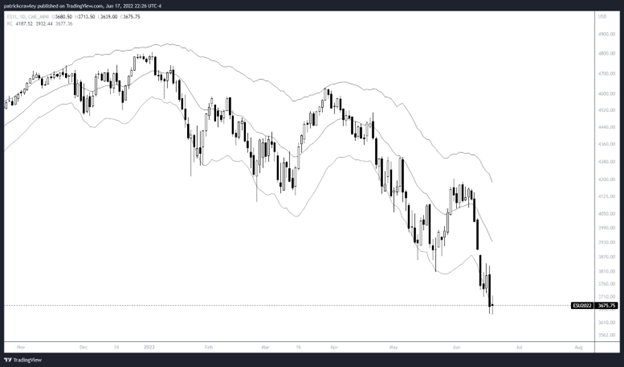 With that said, stock indexes are very mean reverting in nature and tend to make their price moves in short-term bursts of momentum, only to retrace a good portion of the move. So of course, shorting at the lows here is questionable in theory, as is buying. Kind of in “no man’s land” at the moment. Again, this is coming at things from a trend trading perspective.

There’s also an absolute bloodbath in crypto. Not only are the primary coins like Bitcoin and Ethereum down over 50% from their April highs, but there’s a liquidity problem. Essentially, the price of crypto went down too quickly and triggered liquidations in overleveraged traders and market participants. The price went down too quickly for many lenders to recoup their collateral, leading to liquidity problems from the big lenders, which created a contagion effect.

Once crypto powerhouses, firms like Three Arrows Capital and Celsius Networks might not exist in a week’s time.

It’s hard to estimate the effect of this devastating crypto crash will have on the economy, as crypto assets and tech high-growth stocks are a huge source of millennial and gen-Z wealth. With the housing market already weak, it’s hard to imagine that these losses in wealth won’t dogpile on the already existing problems in US housing.

Things are even bad in energy land this week too, truly leaving investors with nowhere to hide. The energy trade has served as a hedge against the rest of the equity market up until now, often displaying a negative correlation to the S&P and Nasdaq. Not this week. 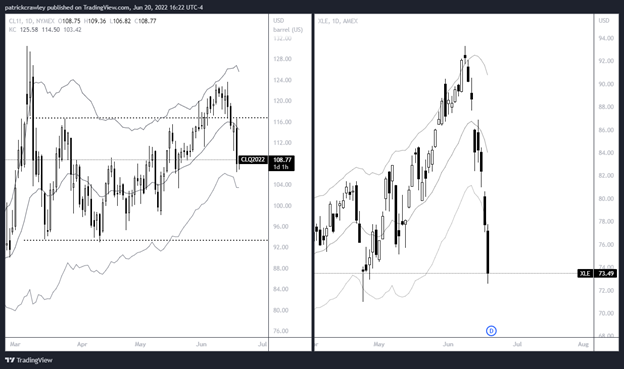 When reflecting on the events of the past week, I think about the Stalin quote “there are decades when nothing happens; and there are weeks when contracts happen.” While last week wasn’t quite that dramatic, it was like a year’s worth of news all in the space of a few days.

Because a lot went down last week, we’ll stick to the most crucial information needed to interpret last week’s action in markets:

We’re hearing from a few key home developers this week, including Lennar (LEN) and KB Homes (KBH). In recent quarters, homebuilder conference calls have been more illuminating on the state of the housing market, the level of demand coming from first-time homebuyers, how rising mortgage rates are affecting demand, and so on. So look out for those as housing is a critical piece to the consumer puzzle and has a significant effect on the stock market, if indirect.

The week before last we got a barrage of bearish economic data. The average price of gasoline in the US crossed the $5.00/gallon mark, consumer sentiment reached a historic low, and inflation hit a 40-year high. This all comes amid a rapidly declining stock market and a mess of a supply chain.

The Federal Reserve put the hurt on further this past week by hiking interest rates by 75 basis points, the highest since 1994, and teasing another large hike for the next meeting. Powell kind of “crossed the Rubicon” here and doubled down on being truly hawkish and reigning in inflation. If we’re to take the Fed at their word, they’re willing to sacrifice the stock market and even unemployment to get inflation under control. Controlling the cost of borrowing through interest rates is an effective mechanism of doing so.

This coming week we’ll learn a lot about housing. Not only will we hear from Lennar and KB Homes through their earnings reports this week, but we also get fresh existing home sales and new home sales numbers.