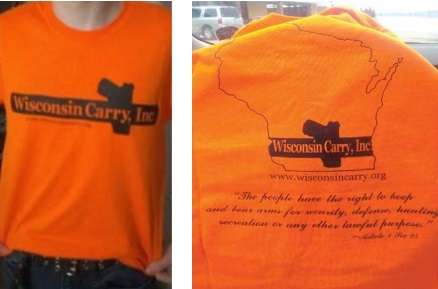 The plaintiffs are two teenagers who attend Wisconsin public schools. Both are gun enthusiasts and supporters of the Second Amendment. To express that support, they own and wear T-shirts that communicate their favorable opinion of the right to bear arms. When they wore those shirts to school, however, they got into trouble with school officials.

In February 2020 when plaintiff NJ was in seventh grade at Shattuck Middle School in Neenah, he went to school wearing a T-shirt displaying a Smith & Wesson logo. The logo included an image of a revolver. Around the same time, AL, a student at Kettle Moraine High School in Wales, went to school wearing a T-shirt bearing the logo of Wisconsin Carry, Inc., a gun-rights group. This logo too incorporated an image of a handgun.

Administrators at both schools barred the boys from wearing the shirts, explaining that any clothing depicting firearms is forbidden. Neither school’s dress code expressly bans clothing with images of firearms. Rather, the dress codes prohibit “inappropriate” attire, which the administrators interpreted to bar any clothing with an image of a different regardless of whether it conveys support for or opposition to gun rights….

[T]he Court has recognized three categories of student speech that may be regulated without regard to the Tinker standard. {The first and perhaps the most obvious category is “indecent[,] … vulgar[,] and lewd speech.” Bethel Sch. Dist. No. 403 v. Fraser (1986)…. Second, the Court has held that school officials may regulate student speech “that can reasonably be regarded as encouraging illegal drug use.” Morse v. Frederick (2007)…. The third category is student expression that others “might reasonably perceive to bear the imprimatur of the school.” Hazelwood Sch. Dist. v. Kuhlmeier (1988).} Kuhlmeier category is plainly limited to ‘speech that others may reasonably perceive as ‘bear[ing] the imprimatur of the school,’ such as that appearing in a school-sponsored newspaper.” The Muller majority did not apprehend this limitation; the church fliers at issue there could not reasonably be perceived as bearing the imprimatur of the school.

Muller … led to the judge’s doctrinal misstep in this case, so clarification is warranted. Because Muller mistakenly applied Kuhlmeier and speech-forum analysis [to viewpoint-neutral restrictions on K-12 student speech], it is overruled. {Because this opinion overrules circuit precedent, we circulated it to the active members of the court under [7th] Circuit Rule 40(e). No judge requested to hear this case en banc.} …

It follows that it was error for the judge here to apply Muller and Kuhlmeier. Unlike the high-school student newspaper in Kuhlmeier, nothing about AL’s T-shirt bears the imprimatur of his school. Norr would construe the message on his T-shirt as school-sponsored or school-endorsed speech. Rather, AL’s Wisconsin Carry T-shirt is materially indistinguishable from the black armbands in Tinker. It’s an expression of his political opinion, just like the armbands expressed the students’ opposition to the Vietnam War. Tinker is the controlling authority….

We return, then, to the Tinker Standard: restrictions on student speech are constitutionally justified if school officials can show that the speech in question “would materially and substantially disrupt the work and discipline of the school” or invade the rights of others. It’s not necessary to prove “that unless the speech at issue is forbidden[,] serious consequences will in fact ensue.” But mere speculation won’t do, and there’s no “generalized ‘hurt feelings’ defense to a high school’s violation of the First Amendment rights of its students.” Rather, school officials must present “facts [that] Might reasonably have led school authorities to forecast a substantial disruption or material interference with school activities” or the invasion of the rights of others. Tinker places the burden of justifying student-speech restrictions squarely on school officials.

At the same time, the Tinker Standard acknowledges the broad authority of school officials to maintain order and discipline and establish conditions in the school environment that are conducive to learning. “[W]e must not ignore the Supreme Court’s admonition that ‘a school need not tolerate student speech that is inconsistent with its basic educational mission.'” The application of Tinker must account for such factors as the age and grade level of the students to whom the speech is directed and any factors particular to the educational environment or history of the school or student body in question. Temporal factors and recent events might be relevant. And the inquiry accounts for the professional knowledge and experience of school administrators in setting and enforcing disciplinary standards.

Because the judge did not apply Tinker, the prudent course is to remand to allow him to do so in the first instance. The parties’ arguments on appeal mostly concerned the choice of legal standard rather than its application; the briefing contains only limited analysis of AL’s case under the substantial-disruption standard. With the legal framework clarified, the judge may want to invite new submissions from the parties….

(Note that the court held that NJ’s case was moot, because he sued only over the middle school policy and he’s out of middle school now, but that AL’s case isn’t moot.)

Note: I was commissioned by the Firearms Policy Coalition and Firearms Policy Foundation to file an amicus brief in this case, which argued that viewpoint-neutral restrictions on K-12 student speech should indeed be subject to Tinker. Congratulations to John R. Monroe, who represented the students.