“Win-win” is the usual dynamic of voluntary exchanges in a modern free market. Both parties win—that is, each participant gets a thing or service they want more than the thing they had before the transaction. That’s a win-win. And yet, zero-sum thinking—you win, I lose—remains pervasive.

In their recent article, “If you rise, I fall,” in Science Advances, a team of three psychologists associated with the University of California, Berkeley and Columbia University probed a particularly perplexing aspect of zero-sum thinking. They find in nine different studies that members of “advantaged groups” tend to interpret equality-enhancing measures as “necessarily harming their access to resources.”

Of course, “advantaged” folks would be entirely correct if equality was being achieved through redistribution: taking resources from one group and giving them to another. That is just classic zero-sum divvying up slices from a fixed pie.

In their article, however, the researchers offer the results from studies in which resources are explicitly not being redistributed. Nothing is being taken from the resources currently enjoyed by the advantaged, but the disadvantaged are being awarded a higher proportion of the newly available resources. The tide is lifting the boats of the disadvantaged a bit higher than it is buoying up those of the already advantaged. And if these findings are right, the already advantaged tend to dislike the relative increase in equality.

In the studies, the resources being apportioned among the advantaged participants (mostly white Americans along with some Asians) and the disadvantaged groups (including black Americans, women, and Hispanics) include wages, home loans, college admission slots, and bonuses. In all of these studies, the researchers conducted surveys among participants aiming to measure five forms of ideological opposition to equality including political conservatism, social dominance orientation, belief that society is zero-sum, system-justifying beliefs, and explicit prejudice.

Instead of analyzing each of their nine studies, let’s focus on a couple of the more salient ones.

In the first study, researchers recruited nearly 600 white US citizens to ponder differentials in mortgage lending between whites and Latinos, the gender pay gap, or legacy admissions preferences. For mortgage lending, participants were told that white homebuyers received $386.4 billion in mortgage loans the previous year while Latinos had only gotten $12.6 billion. One set of participants was told that banks were proposing to increase the amount lent to Latinos in the next year by $7.3 billion while leaving the amount lent to whites the same (equality-enhancing). Another set was told that there were no changes in bank mortgage lending (status quo). And a third group was told that banks were proposing to reduce mortgage lending to Latinos by $7.3 billion (inequality-enhancing). Note that the resources available to whites do not change in any of the scenarios.

The participants were then asked, “How do you think this proposal will affect White homebuyers’ chances of getting mortgage funding from these banks in the next year?” They were asked to rank their responses on a seven-point Likert scale running from -3 through 0 to +3, indicating greatly harm, no effect, and greatly improve, respectively.

Remember, in this study, the resources available to the advantaged group do not change in any scenario. And the researchers found that their results persist when controlling for ideological beliefs. Similar results were found in subsequent studies in which participants were explicitly told that resources were essentially unlimited but that disadvantaged folks would gain greater relative access. The scenarios were designed to be explicitly win-win.

Experimenters then exposed participants to two scenarios. In the first equality-enhancing scenario, participants read a proposal in which five extra bonuses would be provided to the Rattlers and 50 extra bonuses to the Eagles. In this win-win scenario, the Rattlers would get 131 bonuses and the Eagles 129 bonuses. The chances that a member of the Rattler team would get a bonus had increased a bit, whereas the chances that an Eagle would receive a bonus went up considerably. 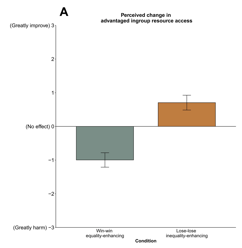 A Rattler’s chance of a bonus declined slightly compared to those of an Eagle fell steeply.

“Across nine studies, we show that advantaged group members misperceive equality-enhancing policies as harming their access to resources, even when the policies do no such thing,” concludes the researchers. “These grim results suggest that perceiving equality as harmful to advantaged groups is a powerful heuristic.”

One potential explanation for these depressing results is that the pervasive background drumbeat of progressive zero-sum redistributionism may simply have made it impossible for many participants to that equality-enhancing believe win-win policies might actually be sincere proposals.

Caveats: Yes, yes, I know all about the replication crisis in psychology, but to their credit, these researchers did preregister their methods and hypotheses at the Open Science Framework.