[***]This is part II in a series of posts discussing First Amendment Limits on State Laws Targeting Election Misinformation, 20 First Amend. L. Rev. 291 (2022). What follows is an excerpt from the article (minus the footnotes, which you will find in the full PDF).

[***]Despite public outcry over the rise of misinformation in political campaigns, there is little federal regulation of the content of election-related speech. Other than in the context of campaign finance, federal law is largely absent in this space. Federal laws governing political speech focus primarily on advertising, but even with regard to advertising existing federal law is minimal and directed mostly at traditional mediums of communication such as broadcast and print. Although federal agencies like the Federal Trade Commission (FTC) have “truth in advertising” laws that target false or misleading content in advertisements, those laws apply only to advertisements affecting “commerce,” which the FTC has interpreted as precluding its ability to regulate the content of political advertisements.

[***]Before we examine the extent to which the First Amendment may limit state efforts to regulate election misinformation, it will be helpful to get an overview of the breadth and depth of current state laws that purport to address lies, misinformation, intimidation, and fraud in elections . To aid in this assessment, we developed a multi-level taxonomy of the types of speech targeted by the various state statutes. At the most general level, we can divide the statutes into eight categories based on the subject matter of the statutes regulations: speech about (1) candidates; (2) ballot measures; (3) voting requirements or procedures; (4) source, authorization or sponsorship of political advertisements; (5) endorsements; and (6) incumbency; as well speech that involves (7) intimidation; and (8) fraud or corruption. The top-level categories are not exclusive and many statutes fall within more than one category.

[***]We also further divided each category based on the level of knowledge or intent, if any, the statute requires before liability attaches. For example, some statutes require that the false speech be made knowingly or with reckless disregard as to the truth of the statement. Other statutes impose liability if the speaker should have known the information was false, which is often referred to as “constructive knowledge.” Still others impose liability regardless of knowledge, which is a form of “strict liability.”

[***]Statutes that directly target the content of election-related speech vary widely in the types of false speech they prohibit (note that most states have more than one type of statute):

[***]As this summary shows, the most common type of statute targeting the content of election-related speech prohibits false statements about candidates for public office. While a few of these statutes merely affirm that for defamation applies in the context of political speech, many statutes impose liability for false statements about a candidate regardless of whether the statement meets the specific requirements of defamation:

[***]This highlights an important point about these statutes, as well as the other statutes that seek to limit election misinformation. In significant ways, election-speech statutes deviate from longstanding theories of liability for false speech. First, the statutes cover a broader range of speech than has traditionally been subject to government restriction: the statutes cover everything from merely derogatory statements about candidates (defamation requires false statements that create a degree of moral opprobrium) to false information about voting measures, voting procedures, and incumbency. Apart from the liability created by these election-speech statutes, false statements regarding most of these topics would not otherwise put a speaker at risk of liability.

[***]Second, a substantial number of statutes impose liability regardless of whether the speaker knew the information was false or acted negligently. In fact, the states considerably with regard to the varied degree of fault required for liability:

[***][The following table shows which states have statutes that fall within the categories of fault described above. Note: States that only have statutes prohibiting intimidation or fraud associated with an election are not included in this table.]

[***]B. Laws that Prohibit Intimidation or Fraud Associated with an Election

[***]While the preceding laws directly target the content of election-related speech, a second set of state laws indirectly regulate election speech through the prohibition of intimidation or fraud associated with an election. Many of these laws were passed to prevent physical acts of voter intimidation. However, at least one state attorney general has used a voter intimidation statute to prosecute political operatives for the distribution of false statements relating to an election, suggesting that these laws could potentially apply to election-related speech more generally.

[***]Thirty-eight states and the District of Columbia have laws that prohibit intimidation and/or fraud in elections (note that most states have more than one type of statute):

[***]As these descriptions show, the fraud and intimidation statutes conceivably cover a broad range of conduct and speech related to elections. And, like the statutes that target specific categories of false speech, they vary in the level of knowledge (and intent) required for a finding of liability.

[***][This table summarizes which states have statutes that fall into each of the taxonomy categories outlined above.] 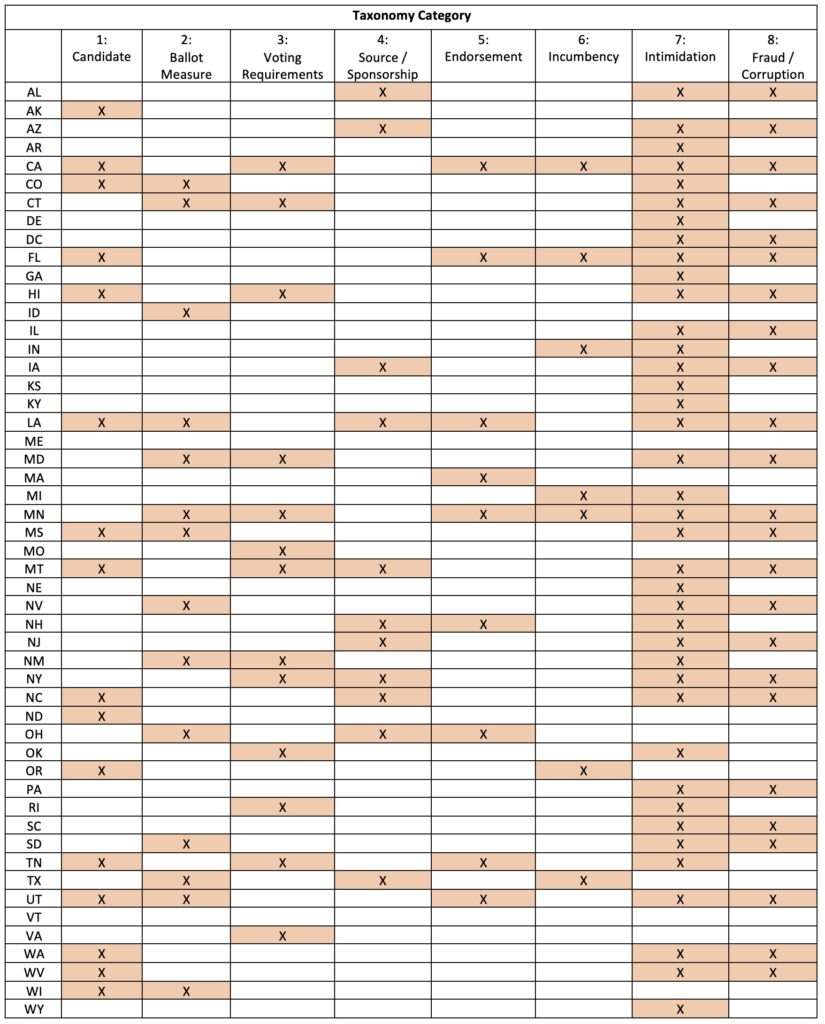